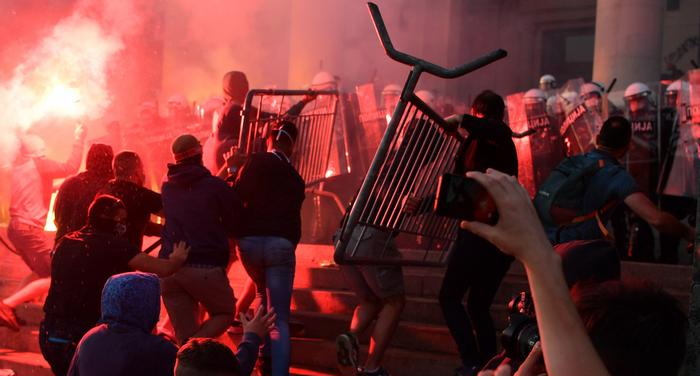 Anti-government protests started in Belgrade on the evening of 7th July after the president announced curfew over the weekend, but this was only a straw that broke the camel’s back. The Serbian government changed its policies on COVID-19 handling multiple times, making it very ineffective.

Many anti-Covid measures were implemented when the pandemic began, but they were all removed during the week of parliamentary elections, during which gatherings with as many as 10 thousand people were held. Few weeks after the ruling party won the boycotted elections by a landslide, they decided to start implementing anti-Covid measures again, causing public outrage, and people gathered to protest in front of the National Assembly not led by any organization or movement, but rather in spontaneous anger.

Apart from poor COVID-19 crisis handling, protests were sparked by many other issues as well such as autocracy, alleged election fraud, corruption, nepotism, and hiding of the true number of coronavirus cases.

Serbia has been drifting away from democracy since the 2014 election after Aleksandar Vučić became Prime Minister, and in 2020 Freedom House removed Serbia from the list of democracies. The parliamentary elections of 2020 were boycotted by almost every opposition party and had one of the lowest turnouts in Serbia ever with only 40%, and the opposition party called “Enough is enough” requested to check the ballots because of alleged fraud but their request was denied. Some opposition parties claim that turnout was as low as 25%.

On the evening of 7th of July 2020 locals and students gathered to protest in front of the National Assembly of Belgrade. Protestors demanded the formation of new crisis staff and the cancellation of the planned curfew. The Demonstration soon turned into a riot with protestors throwing rocks and bottles at police, while police responded with tear gas. Around 10 P.M. one group of rioters stormed the National Assembly. They occupied it for around 20 minutes after which police managed to push them out. The violence lasted until 3 AM when the last group of protestors decided to leave. There were injuries on both sides, but there were no fatalities.

Shortly after the start of the protest in Belgrade, the protest also started in the town of Kragujevac where demonstrations remained peaceful.

In Belgrade, police were reinforced by Gendarmery and Special Anti-Terrorist Units. Protestors again tried to storm the National Assembly but this time they were unsuccessful., throwing stones, bottles, and torches at the police; riot cops responded with truncheons, tear gas, and chemical grenades of the M-79 AG-1 variant.

Few police vehicles were set on fire. Police cavalry and police with police dogs arrived around midnight and started to disperse protestors. By 2 AM police outnumbered the demonstrators and by 3 AM police completely dispersed the protestors. Hundreds were injured on both sides with few heavy injuries, and a few police vans and cars were burnt, there were no fatalities. Hundreds of protestors were arrested.

In Novi Sad protestors, broke windows of the town hall with rocks after which they threw Molotov cocktails in the building. They also demolished the premises of the ruling party and broke windows on Radio Television of the Vojvodina building. Police weren’t present during these events and arrived later, clashes between police and protestors began as soon as police arrived. Several people were injured and several others arrested.

In Kragujevac protestors broke windows of the police station and threw torches inside, setting parts of it on fire. After this police threw tear gas and charged at the protestors. Few people were injured and a few more arrested.

Niš and other cities

In Niš police withdrew to the police station shortly after the arrival of the protestors, who cheered at them as they retreated. Peaceful protests were held in many other Serbian cities.

On the 9th of July, protests were held in almost every larger town in Serbia and remained peaceful. Video of a policeman setting a trash can on fire was released, as this kind of action was usually blamed on the protestors.

Several news sites reported that the minister of defense, Aleksandar Vulin ordered troops of the 63rd parachute brigade to be deployed on the protest but that soldiers disobeyed. Aleksandar Vulin denied these claims, but the commander of the brigade Nenad Bulatović remained silent.

On the 10th of July in Belgrade protest again turned into a riot. Special Anti-terrorist Unit intervened with armored vehicles. Police used tear gas, truncheons, and rubber bullets to disperse the protest.

Several protestors were injured and a dozen more were arrested. Conflict also escalated between the protestors when one civilian stabbed another with a knife, his motive was unknown. In other cities and towns, protests were peaceful.

On the 15th of July Serbs living in the USA, Germany, France, and Austria also protested in solidarity with those in their home country. After the 17th of July, no further protests were held in order to help contain the COVID-19 pandemic.

The current ruling party is opposed for its corruption by people of various political beliefs ranging from far-right to far-left. Protestors disagreeing with each other created an internal conflict between them which caused violence between them and deterred people of one group from going on the protest when they saw the other one is prevailing. One of the main disagreements among protestors is if the revolution should be violent or peaceful.

This disagreement led to led to a clash between protestors on the 9th of July. The government and several media have accused far-right groups of causing the violence, while many opposition leaders and analysts have accused the ruling party of sending their supporters to cause violence. These claims were denied by the ruling party.

Aleksandar Vučić, current president of Serbia, called the protests “an act of terrorism” but he also stated that the demonstrations didn’t bother him at all. He said that foreign factors organized the protests, he blamed the governments of Croatia, Montenegro, and Russia for the protests.

Aleksandar Vulin, then the minister of defense, said that “special war” is being waged against the country, and called a protest on 9th of July “an attempt to start a civil war”.

Ana Brnabić, current prime minister, said that protestors threw the tear gas at the police, despite other government officials saying that police used tear gas. Nebojša Stefanović, then the minister of police, said that there was no police brutality on the protest and said that police acted only according to the law.

USA and EU said that they are concerned about violence by both the police and the protestors.

Russia and Montenegro denied Vučić’s claims of their involvement in the protests.

Cause Anti-government protests started in Belgrade on the evening of 7th July after the president announced curfew over the weekend, but this was only a straw that broke the camel’s...